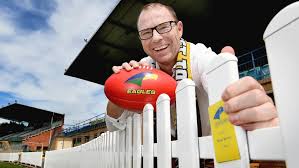 As part of a substantial upgrade to Woodville Oval funded by the City of Charles Sturt, Council engaged Bluedog to manufacture and install our gly® steel picket fence and gate system around the perimeter of the sports oval. We provided a budget estimate to Council for the purposes of allocating funds in 2014. In mid 2016 Council released the project for tender. The new pearl white picket fencing replaced seriously dilapidated post and rail chainwire fencing.

The Eagles have since launched a pick a picket program to raise funds to improve other player and spectator amenities. The plaques that are attached to the individual pickets (uprights) on the fence combine the colours of the Woodville and West Torrens football clubs, that amalgamated in 1991 to become the present-day Eagles.Current Eagles General manager of commercial operation Chris Branson was reported in The Advertiser saying the proceeds from the plaque sales will go back into providing a better experience for supporters at Woodville Oval, saying “The money going back to improving the facilities, which will be a better game-day experience for fans when they come to home games,” You can read the full article here. Main photo credit: Roy Van Der Vegt.